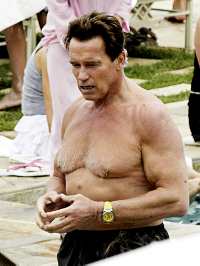 When will it ever end? Granted, the editorial thrust of some of American Media’s publications, e.g., Weekly World News and The National Enquirer, leaves the door open for controversy and litigation. But nary a week goes by without some unsavory AMI headline hitting the mainstream media. (Think Anthrax, Ugliest Person list, Bonnie Fuller, Arnold, etc.)

Today’s L.A. Times reports on hush money paid by AMI to a woman who had an affair with the future Governor of California. At the time, the company was negotiating with Mr. Schwarzenegger to become a paid consultant to its stable of muscle/fitness mags – a business relationship that exploded in the media last month.

As a PR guy, I have considerable empathy for the company’s in-house mouthpiece Stu Zakim. Stu, so much for having a restful summer!