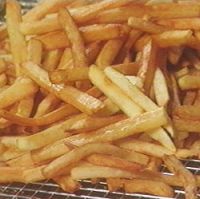 Super Size Me has faded into a distant memory. Public awareness of the health perils of fast food spurred by that film and the indefatigable Michael Jacobson has all but dissipated. Fast food is hot again.

— McDonalds, reporting its best monthly sales in two years, chose to line its trays with nutrition information rather than fulfill its promise to eliminate trans-fat laden fries.

— In fact, the company just revealed that its fries have a significantly greater trans-fat content than believed.

Sixty-four percent of adult Americans (about 127 million) are categorized as being overweight or obese. Yet the epidemic has disappeared from the main media menu. Was it the PR maneuverings of the QSRs that so successfully protected their franchises? Has fast food’s success on The Street trumped the public good? Could we be seeing the natural counteraction to the media saturation of Super Size Me?

From a McDonalds spokesperson: “It is important to note that McDonald’s menu has a wide range of choice and variety, with an array of portion sizes, including three options with french fries: small, medium and large.” You choose.