A couple of weeks back, I stopped by PBS MediaShift’s first social mixer in NYC. It was held at a restaurant in the East Village, a vibrant neighborhood once known for the local squatters in Tompkins Square Park. I enjoyed seeing SF-based editor Mark Glaser and his New York-based marketing lead Dorian Benkoil whom I know from his days toiling at Media Bistro.

Others on hand that night included Craig Newmark, Stowe Boyd, Poynter’s Bill Mitchell, Mo Krochmal and TrylonSMR‘s Lloyd Trufelman. They were all in town for the Miami-transplanted WeMedia conference skedded for the next day. I took the opportunity to probe Lloyd on the state of the PR biz. Lloyd being Lloyd didn’t mince words.

He suggested that those in our biz who rely exclusively on Twitter or Facebook to advance their client’s communications goals are fooling themselves. The most buzz-worthy news memes still originate with mainstream journalists (an ecosystem that admittedly has evolved). According to Pew’s 2011 State of the Media

“News organizationsâ€”old and newâ€”still produce most of the content audiences consume. But each technological advance has added a new layer of complexityâ€”and a new set of playersâ€”in connecting that content to consumers and advertisers.”

Now Lloyd’s a fairly social-savvy fellow (albeit one w/o a personal Twitter feed). He produces the NYConvergence site and feed, and, like me, is one of the few in the biz who has embraced digital as a complement to traditional PR competencies.

I mean who can deny the power yielded by those in-house social media leads with huge followings? Don’t they add value as conversation catalysts for their respective enterprises? 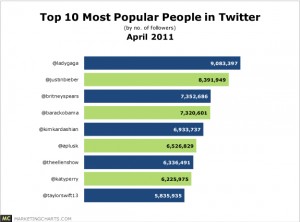 I gave this a little more thought and began to realize that our world, or at least a portion thereof, has gone Twitter and Facebook crazy at the expense of more mainstay tactics. In fact, I’ve noticed of late an increasing number of digital start-ups that have relegated their PR chores to individuals on the sole basis of these individuals’ engagement with the social graph. No PR experience required. Just lots of followers and some modicum of fame in the tech bubble.

It’s almost akin to mounting a media relations program and only using HARO and Profnet for story leads. It’s even mildly reminiscent of the dot-com era when newbie CEOs celebrated when their company press release posted…on one of the paid wire services!

Now don’t get me wrong. Today’s PR professionals who choose to ignore the “shared” and “owned” dimensions of the communications paradigm (as complements to the tried-and-true “earned” and “paid” pieces) will do so at their own peril. But putting all your eggs in the social media basket absent the competencies that still define the profession would also be a mistake. Even Twitter’s “influence” is said to be waning (while Facebook’s is ascendent.)

Net net: My clients’ goals haven’t changed. They continue to seek a positive, branded presence in “the media” — one that creates action or advances POVs. What has changed are the means to those ends, and the nature of “the media” itself.