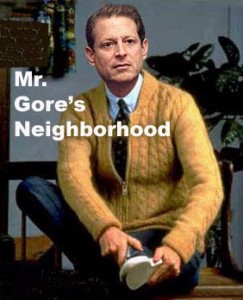 The blurring of entertainment and politics is accelerating. From Martin Sheen to Fred Thompson to Jon Stewart to Geena Davis, it’s hard to keep up.

Now we have the would-be president Al Gore attending a rally and concert in New York tomorrow night, not to castigate the Republicans or pontificate on global warming, but rather to elicit media attention, video content, and cable carriage for his new cable network Current TV.

Under the umbrella of “TakeBackTV,” with a groovy website to match, Mr. Gore is on a tour (catchy, huh?). Next stop, Philly on October 20.