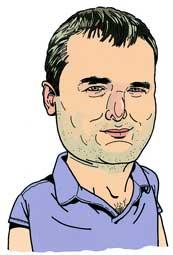 For the 17 million+ citizen journalists toiling in the blogosphere nowadays, Tom Scocca’s page one New York Observer profile of “the Rupert Murdoch of the blogosphere” Nick Denton is a must-read. It contrasts with the sanguine reaction to the The New York Times Magazine profile of the Gawker founder that appeared last spring.

Now that blogging is mainstream (or is it?), the new media moguls, who also include Jason Calacanis, John Battelle and Arianna Huffington, to name just three, are the toasts of the town. Their prognostications of new riches coming from the paradigm shift of advertising to their online worlds certainly makes one want to believe. But, of course, I also was pumped up by the Dreamworks/Imagine/Paul Allen content venture pop.com. (Here’s more from Battelle.)