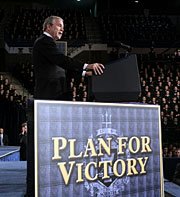 Several years ago, I had the privilege of representing The Associated Press as it celebrated its 150th anniversary. We were at a press event at the Newseum in northern Virginia to unveil a retrospective exhibit of artifacts and news bulletins that earned the wire service its reputation as one of the most esteemed news organizations in the world. Lou Boccardi, the AP’s powerful, but unassuming president (who CBS cajoled out of retirement to investigate the Dan Rather debacle), had just finished his remarks.

A late-arriving Washington Post photographer approached Mr. Boccardi to ask if he would mind going back up to the podium for a set-up shot. I’ll never forget the contempt in Mr. Boccardi’s eyes when he promptly refused and told the photographer to shoot whatever he liked. It was as if the shooter had committed sacrilege.

Today’s New York Times has a fascinating story on the famous photograph of Rosa Parks seated at the front of a Montgomery, Alabama bus with a dour white man seated in the background. We learn from Peter Applebome’s column that the mystery man behind Ms. Parks is not some southern segregationist, but rather a reporter for the UPI, the AP’s once biggest rival. He was asked to sit there by his photographer to more accurately frame the historical moment when the new law prohibiting racial discrimination went in to effect.

The times have changed. Journalists bristle when they believe they are being played through artifice. Sure, the giant check presentations and ribbon-cutting ceremonies (over-sized scissors and all) are standard and accepted fare nowadays. They cause little harm. It’s when PR pros create a photo-op that is either blatantly commercial or aimed to deceive that the news media gets its dander up. And rightfully so.