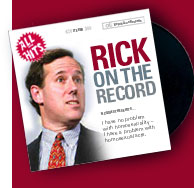 Michael Schiavo (remember that name?) issued a news release today announcing the formation of a political action committee (PAC) to raise money to defeat those members of Congress who exploited the most intense personal decision of his life so they could advance their political agendas.

As Cindy Sheehan struggles to stay relevant, while fighting the expected backlash to her successful PR campaign, it remains to be seen just how much tsuris Mr. Schiavo will have to endure as he commences his campaign to take tangible political action against the interlopers who so brazenly disrupted his life.