I really enjoy watching the cooking shows on TV. From the over-the-stove talents of the MasterChef and Lidia’s Italy to the other talents of Top Chef’s Padma Lakshmi and Giada at Home, these shows, for me, are a veritable feast. On the other side of the culinary coin resides Adam Richman in Man v. Food!

And who doesn’t revel in watching Chef Ramsey dress down some lame restaurant owner in Kitchen Nightmares? His reaction alone to the tasting at the outset of each episode is priceless.

I suppose I’m drawn to this content because I happen to love to dabble in the kitchen myself.

My wife may
be Italian, but I’m the one who makes the sauce (and the meatballs).

I don’t however code.

I’m more of a hack than a hacker, flack than a….  Maybe it was that early taste of MS-DOS that forever cleansed my palate of this popular proclivity.

Hence sitting through a few of the presentations at this week’s New York Tech Meetup left me a little high and dry. I mean how pumped can one get watching a nervous geek painstakingly key-in computer code on a giant screen before an SRO audience of 800? The answer depends.

For me, not very. But for many at NYU Tuesday evening, it was like the fifth game of the Major League Divisional Playoffs or the finals of American Idol.

The audience seemed mesmerized by the letters, numbers and symbols rolling out horizontally before their eyes. When a typo was made, several folks blurted it out before the coder on-stage even knew what hit him.

When the coding was finally cooked and ready to serve — and it actually sated the audience’s discerning appetites — the adulation showered on the coder could give the announcement of the winning couple on Dancing with the Stars a run for its money.

As for me, I’d just prefer skipping how the sausage was made. My attraction to the monthly gathering rests with getting wowed by the every day utility of the apps, products and services that emanate from the all-night hackathons. Perhaps it’s because my job to try to bridge the communications gap that invariably exists between the developer and the end-user.  For start-ups, it’s frequently less a question of where to take the story, and more of how to tell the story. 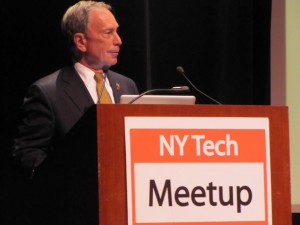 Sure it was very cool hearing Mayor Mike describe how he personally soldered the transistors onto a motherboard to build the first Bloomberg Terminal in a pre-PC age some 30 years ago.

But few can argue with a powerful narrative that explains how those terminals facilitate real-time data sharing and its implications for the financial markets and other industries.

Of the nine or so presentations, I’d say the one with which I was most enamored was for Aurasma. We’ve all heard about 2D barcodes (QR codes to some). I wrote a post last spring proclaiming that their ubiquity at SXSW earned them the distinction of “winning” the giant tech fest.

Taking the idea of smartphone-scanning of still images to the next level — GoogleGoggles notwithstanding — Aurasma’s developers treated the audience to a demo wherein a still photograph on the cover of USA Today morphed into an ABC News video clip on the same subject with the simple click of a smartphone. Or a scan of an image of a DVD player on its box instantly launches a video tutorial about the machine.

That’s not to say that I didn’t also enjoy hearing bit.ly’s Matt LeMay, whom I’ve met previously over a table of unpeeled barbeque shrimp and fine wine, outline his company’s plans to monetize bitly’s billions and billions of bits of data for anyone wishing to analyze the online conversation.

He showed the audience a spare, Google-like search page under which all that data resides, and can be searched real-time…by geography too.  Smart (especially given Twitter’s limited public archives).

I had to dash out early — thank you Mayor Mike — and was sorry to have missed the presentations from Gust and from Framesocket for which my pal Clay Hebert played a presenting role.  I’ll check out their sites.

All photos and video:  Peter Himler with a Canon PowerShot SX20 IS