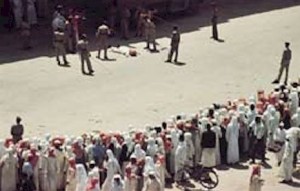 When the United Kingdom’s University and College Union decided to inanely promote a boycott of Israeli educational institutions, the story, as outrageous as it was/is, did not have much in the way of news legs.

But isn’t that rule, rather than the exception, for too many of today’s most notorious scandals? I mean one would think a story about 190,000 AK47 rifles going missing in Iraq would last more than one day. Right? Wrong

Well, we live in an age when the publication of the Pentagon Papers would capture few imaginations. Perhaps the myriad misdeeds of this administration are so incredulous that we’ve grown numb from them all? Who was it that said: where is the outrage?

But back to the overtly anti-Semitic Brits. When the free press fails to stand up for the voice of reason, other tactics must be taken to rise above tyrannical silence. Enter the advertorial. Over the weekend, a group of esteemed Nobel laureates (aren’t all Nobel winners esteemed?) condemned the so-called British academics in full-page newspaper ads. (They probably should have asked if the Brits would prefer Wahabiism.)

And, come Wednesday, the American Jewish Committee will jump into the fray with its own full-page ad featuring a compendium of university presidents, led by Columbia’s Lee Bollinger, expressing their outrage.

Since the news media failed to give this story its just due, let’s hope that these two advertorials revive journalists’ good conscience, not to mention public consciousness. Right now, the Israeli press seems to be the only group of media following this story…and the blogging community, of course.