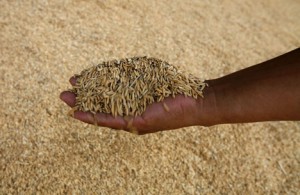 The GMC crowd saw an opening and carpe diem! After years of public abuse and regulatory setbacks, some smart (PR-minded) person at “agricultural biotechnology” giant Monsanto had the foresight to lever the worldwide food shortage to make a cogent case for its major staple — genetically modified seeds.

(Hey, I kind of like the term “agricultural biotechnology. It reminds me of when the Chemical Manufacturers Association changed its name to the American Chemistry Council, i.e, a harken back to my junior year in high school. Anyway, it sure beats genetic engineering.)

“Perhaps seeking to avoid controversy, Monsantoâ€™s announcement did not mention the term ‘genetic engineering.’ It referred instead to ‘other technologies’ beyond breeding.”

Be that as it may, the point of this post is to recognize Monsanto for astutely pouncing on the tragic world events that have landed on the seed company’s doorstep. Moreover, Monsanto pegged its salvo to a high-profile gathering of world leaders addressing the very issue for which the company’s science and products aim to resolve.

“The announcement, coming as world leaders are meeting in Rome to discuss rising food prices and growing food shortages, appears to be aimed at least in part at winning acceptance of genetically modified crops by showing that they can play a major role in feeding the world.”

So here’s the question: will the worldwide food crisis finally supplant the superstition over genetically modified crops and pave the way for Monsanto to “…double the yields of corn, soybeans and cotton by 2030 and…require 30 percent less water, land and energy to grow?”

And what happens to the great White (House) hoax called bio-fuels? Important questions.