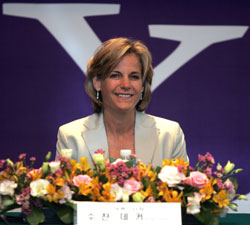 To “light up the social graph” was how the speaker described her efforts to take her company to the next level, i.e., “igniting” some “250 million email relationships,” “tens of millions in groups,” a myriad Flickr users, etc.

The company is Yahoo!, the speaker, its president Susan Decker addressing the Advertising 2.0 Conference last week in NY.

Few exited the room without a positive impression of Ms. Decker. The Street also seemed to like what it heard. I think YHOO jumped 3.7% by the time the closing bell chimed that day. Me, I was delighted to hear that she and I lit up the same university, though not at the same time.

Back to igniting the social graph… This was the first time I heard that expression. In fact, it’s not easy keeping up with the vernacular digitas. Here are some ways to stay current:

For that last bullet, I’ve always opted for non-fiction, and specifically books related to the industry in which I toil. For a long time, it was any book about the mainstream media including Gouldon’s Fit to Print,” Auletta’s Three Blind Mice, Boyer’s Who Killed CBS, Kurtz’s The Fortune Tellers or Spin Cycle, Jones’s The Trust, Alterman’s What Liberal Media, and too many others. (Pedestrian media-related titles from Neuharth, Fairchild, Cindy Adams, Linda Ellerbee…also line my shelves.)

But somewhere along the road, I came across George Gilder’s prescient long-form article Telecosm. A few years later, I stumbled upon Negroponte’s newly published Being Digital after which my literary-driven, professional development took a different turn.

It included Gladwell’s The Tipping Point, Gillmor’s We the Media, Scoble and Israel’s Naked Conversations, Battelle’s The Search, Moran’s Do It Wrong Quickly, Libert’s We Are Smarter Than Me, Tapscott’s Wikinomics, Heath and Heath’s Made to Stick, McConnell and Huba’s Citizen Marketers. On deck are Bhargava’s Personality Not Included, Bernoff and Li’s Groundswell, and Breakenridge’s PR 2.0, a book that Brian Solis, whom I met over the weekend, strongly recommends. Solis also is offering a free “essential guide to social media” e-book.

For those in positions to hire or promote PR professionals, you might just gauge their worthiness by the parameters listed above…and their personal reading lists. One’s curiosity speaks volumes about his or her prospects for success in this markedly changed PR business.