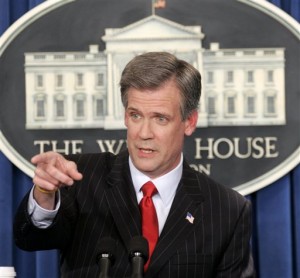 It’s one thing to re-post on your A-list blog the actual e-mail exchange between yourself (a newsmaker) and a journalist (from The New York Times, no less), as was the case with that outspoken Cuban Maverick.

But it’s quite another to take an already published newspaper profile and re-write it — quotes and all – for posting on an established website (for which you happen to serve as editor).

The latter incident has raised all kinds of journalistic (and newsmaker) eyebrows, including those of former journo (albeit from cable TV) and current WH spokesperson Tony Snow who (surprisingly) defended the offender, President Bush’s new domestic advisor. The offended newspaper, The Syracuse New Times — threatened a lawsuit, as reported by the right-of-center New York Sun (and others).

The act of personally re-writing the first write of history has been dubbed “zinsmeistering” after Ron Zinsmeister, the man who had the audacity to take back what he said. The Washington Post offered its opinion on the matter.

From a PR perspective, wouldn’t it be great to review the copy before it’s published? In fact, some news organizations, as a matter of policy, will double-back with you to “check facts.” It is at this time when any modification — to your quotes or otherwise — might take place. Otherwise, your only other recourse — unless you’re Marc Cuban who wisely conducts his interviews via e-mail — is a request for a published correction (in the case of factual mistakes) or the submission of a letter to the editor (for additional clarification).

Of course, if you have an A-list pulpit, you have the power to “correct” the news as you see fit. “Journalism matters.”