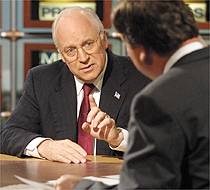 “Larry King. What about Larry King?” “Bill O’Reilly will give us the best play.” “Hey, we should think about Leno. How tough can he be?”

I’m always amazed by the mainstream media’s fascination with the everyday machinations of PR. The latest example surfaced yesterday in the Washington Post where the usually astute Dana Milbank breathlessly reports on how the Harvard Law grad turned communications counselor to the Veep (and wife of the head of the FCC, her primary qualification for the job), elevated the respected Tim Russert to the top of the sympatico reporter list for Mr. Cheney’s talking points on the Plame affair.

The piece “In Ex-Aide’s Testimony, A Spin Through VP’s PR,” recounts some of the behind-the-scenes maneuverings by this administration to minimize bad news or maximize its POV through “strategic” media relations.

“On jurors’ monitors were images of Martin’s talking points, some labeled ‘on the record’ and others ‘deep background.’ She walked the jurors through how the White House coddles friendly writers and freezes out others. “

So, did anyone really think that the White House would consider booking Mr. Cheney with Leslie Stahl or Keith Olbermann? Nah.

“She put ‘Meet the Press’ at the top of her list of ‘Options’ but noted that it might appear ‘too defensive.’ Next, she proposed ‘leak to Sanger-Pincus-newsmags. Sit down and give to him.’ This meant that the ‘no-leak’ White House would give the story to the New York Times’ David Sanger, The Washington Post’s Walter Pincus, or Time or Newsweek. Option 3: ‘Press conference — Condi/Rumsfeld.’ Option 4: ‘Op-ed.

“For all the elaborate press management, things didn’t always go according to plan. Martin described how Time wound up with an exclusive one weekend because she didn’t have a phone number for anybody at Newsweek.”

At least we can count on someone to get to the real truth behind the Veep’s media maneuverings:

“‘You didn’t have a lot of hands-on experience dealing with the press?’ defense attorney Theodore Wells asked. ‘Correct,’ Martin replied. After further questions, she added: ‘Few of us in the White House had had hands-on experience with any crisis like this.'”

I wonder how Tim Russert felt about his White House designation?