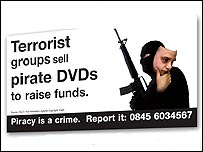 Boing Boing, according to most measures, is one of the biggest blogs around. I’ve checked it out on occasion only to learn that much of its home page was of little personal or professional interest to me. Today was different. I immediately noticed a posting by Xeni Jordan on the placement of webcams to capture DVD bootleggers in action in L.A. (The posting was destined for Wired News, but the added exposure on Boing Boing will help it (and Wired) gain considerably more traction…than a Wired posting alone.

Video piracy, whether in the form of bootleg DVDs or digital file exchange on the Internet, is a costly (to those that create the content) and tremendously divisive issue. While the proposed lawsuits meander their way through the courts, the industry has been forced to take the bull by the horns to curtail the practice. In this case, via a collaboration between the LAPD and the MPAA.

I can go on ad nauseum about video piracy, but what interested me was the added pop this story will no doubt receive through its concurrent “placement” on Boing Boing and Wired News.