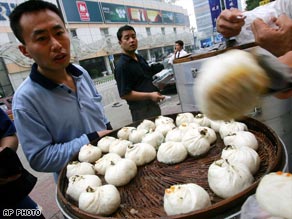 The authorities in China don’t take too kindly to cardboard buns . They announced strong measures against a TV news program that staged a segment featuring steamed buns stuffed with cardboard, soaked in caustic soda and seasoned with pork flavoring…fabricated by the station to garner higher ratings.

That’s all? Have we got a reality show for you!

“China’s propaganda departments on Monday reiterated that all media staff must ‘strictly follow news ethics’ and persist with the ‘authenticity of journalism’ days after the infamous cardboard bun expose was labeled a hoax by the government.”

I was especially enamored by the use of the term propaganda in describing the government agencies. Unlike our own, here’s one government that calls a spade a spade.

Come to think of it, imagine working for “The Publicity Department of the Communist Party of China (CPC) Central Committee?” Sounds like a film or TV studio. Nevertheless, it was one of the three Chinese government entities that issued an edict that:

“…reminded state media and provincial-level publicity departments in charge of local media to ‘brush up on journalistic ethnics’ and ‘maintain the image and social credibility of the Chinese media. Authenticity is the lifeblood of journalism while fabricated reporting is its arch-enemy,’ it said.”

Sounds nice. Is the Chinese government actually warming to the precepts of a free media as articulated in the First Amendment of the U.S. Constitution? Hardly.

“All media organizations must ensure the authenticity of news sources and facts and regulate the flow of news editing such as the use of public contributions and Internet resources, it said, adding editors are not allowed to run stories that have not been verified. The statement also required reporters to ‘take press cards while covering new events.'”

So how does a Chinese blogger get a press card anyway?

As punishment for this journalistic transgression, which pales in comparison to the daily fare we see on Fox News,

A demerit? More ominously, I wonder if the Jayson Blair of Beijing TV will now be executed? Stay tuned.