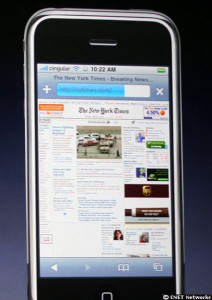 The Social Media Collective got its dander up a few weeks back when one of blogdom’s more respected pundits had the audacity to use her authoritative blogging pulpit to advance the interests of a paying client. She disclosed the arrangement, but nonetheless took a beating in the online court of public opinion.

This blogger didn’t see what all the fuss was about, and frankly, was probably “guilty” of the same crime, i.e., using his space to wax poetic on various paying clients from time to time — always with full disclosure of the relationship.

In my last post on this conundrum, which, by the way, has existed since the nascent days of PR people-turned-“citizen” journalists, I even suggested that prospective clients might be tempted to favor an agency based on the agency’s having an A-lister on its staff. “Put him on the account, and the business is yours!” (At least until he refuses to share the client’s virtues with his readers.)

A post yesterday from authoritative PR/marketing blogger David Parmet, a friend, popped in my RSS reader this morning. In it was a promotional plug for his client Raw Digital. At the end of the post, we see the disclosure, but wonder whether the topic would have found its way onto David’s blog as a stand-alone, i.e., without the fee:

“Weâ€™re launching Raw Digital with a special event in NYC tonight. Our first bit of coverage is here. More to followâ€¦”

Time shifting viewing habits. Appointment TV. Video for all media channels 24/7…. Timely and relevant topics to marketers, for sure…I guess. Anyway, aren’t we just extensions of our clients’ communications arms? And didn’t someone proclaim the death of the traditional media filter (by trumpeting our new-found ability to bypass it)?

Personally, I don’t believe we’ve reached a point when an optimized press release and post by an influential blogger/PR person (in that order?) alone can carry the day. Maybe we need to add the burgeoning influence of one another’s social network(s). The Microspersuader had a good post on this earlier this week (in which he plugs a client of his firm’s).

Nevertheless, the courting, engaging, pitching (or whatever you wish to call it) of the media filter continues to merit “core competency” status for the PR pro…at least for the foreseeable future.