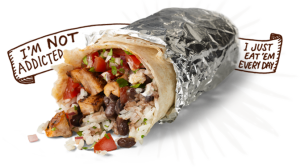 Everything about this is strange. Has Chipotle’s Twitter Account Been Hacked? (via @sfiegerman): http://t.co/s2RQGh0xLG
â€” Samantha Murphy (@HeySamantha) July 22, 2013 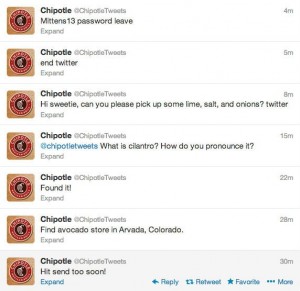 Today we learn from both Mashable and Fast Company that the faux-hacked tweets were in fact a ploy by the QSR to generate buzz, and in this case, new followers, some 4000 of them.

“We thought that people would pay attention, that it would cut through people’s attention and make them talk, and it did that,” Chris Arnold, a Chipotle representative, told Mashable in an interview. “It was definitely thought out: We didn’t want it to be harmful or hateful or controversial.”

This blog has previously raised ethical questions over just how audacious a company or individual must act to garner media attention — good, bad or ugly. And whether that burst of publicity will accrue positively to the brand over the long haul. In fact, Fast Company’s gripe with the stunt was not Chipotle deceived its followers, but that the nature of the deception was, well, ho-hum.

“The stunt, however, failed a test that Fast Company’s digital executive editor Noah Robischon feels is a cornerstone of social media: Don’t Tweet Boring Shit. If blandness isn’t a tenet of Mexican food, why would it be good on a Mexican fast food joint’s Twitter feed?”

Separately, Twitter’s use of fabricated tweets (from real people) to promote its new ad product produced an apology from the social media company, while some may argue that Rolling Stone’s decision to make a rock star out of a terrorist gives the once iconic publication renewed relevance. Still others may even opine that Anthony Weiner’s sexcapades keeps him on the front pages, as his opponents are relegated to sleeping in the projects in their struggle to garner a little ink or airtime.

Personally, I just wonder whether there’s anything today that would be considered out of bounds. Maybe that Subway sandwich shop worker who Instagrammed a photo of his genitals on a sandwich will soon have his own reality show?