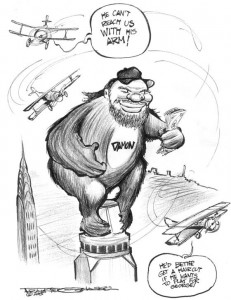 So you’re Johnny Damon’s PR guy. Your client just did the unthinkable. The unkempt (and thus wildly adored) Red Sox centerfielder took the Steinbrenner bait — $52 million over four years. He’s now a Yankee. In so doing, Mr. Damon left the rabid Red Sox fans with as much contempt for him (and the team’s management) as they likely had for the Bambino when he bolted Beantown for the Big Apple 87 years ago, let alone the many others since.

Is there any hope of rebuilding his burnt bridges to Boston? Not a chance, especially since it appears he didn’t even let the team counter offer. The Governor, whose first name mandated a weigh-in, had this to say:

“Do you owe anything to the team that you’ve been with for a number of years, and to the fans that have supported you like the fans have?” asked Romney. “And my opinion is, yes, you do owe something.”

What could he do to avoid the beer bottles and boos on his trip back to Fenway next spring? This: “Mr. Steinbrenner I am flattered that you so fervently pursued me to join your team. But, I have made my career in Boston. I like the fans and the organization, and there’s more to life than money.” Well, that ain’t about to happen. After all, this is pro sports where money is everything. Still, I think about the positive (and future bankable) impact of Reggie telling the NFL, “I have decided that a college degree is more important than the money right now.”

With his reputation in Boston in tatters, Mr. Damon can never go home again. Now he has to make peace with the rabid Yankee fans who heretofore have preferred the Aqua-Velva look of Derek Jeter.