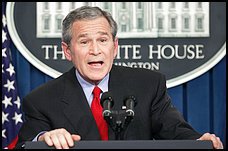 As the battle lines are drawn over just how much power the executive branch should have to “fight the war on terror,” few will argue with the awesome power on display these last couple of weeks as this administration set about the task of fishing Mr. Bush’s approval ratings out of the toilet. He and his inner circle pulled out all the stops to reframe the debate and reshape public opinion at a time when many media types were penning their death notices for this presidency.

The PR consiglieres on Pennsylvania Avenue were not about to capitulate. They deployed their most potent troops: the President, Vice President, Secretary of State and Secretary of Defense, among them, to their channel of choice Fox News , and elsewhere, to blunt their critics. The usually inhospitable Bill O’Reilly positively gushed as he sat opposite Mr. Rumsfeld to whom he quipped, “Are you having fun, yet?” Mr. Bush did his part by holding two rare news conferences and giving a number of canned speeches. Every surrogate and pundit available to the White House PR machine suddenly surfaced in message unison and media ubiquity.

Guess what? The strategy is working. In spite of possibly breaching the U.S. Constitution and other sordid misdeeds, Mr. Bush’s numbers again are on the rise. The latest polls have the communications team on Pennsylvania Avenue high-fiving at its success with its end-of-the-year public relations offensive.

The fact remains: newsmakers, no matter what flavor, have incredible power to influence public opinion with relative ease. From George Bush to Steve Jobs to Tom Cruise, powerful A-listers have the capacity (should they choose to use it) to command and control the primary channel of influence — the news media. This is in spite of the promise of the citizen journalist movement (“the fifth estate”) to serve as a new media check and balance. At this writing, however, the blogosphere remains too fragmented and immature to temper the powerful — especially those who have succeeded in undermining the ability of the media to do its job in the first place.