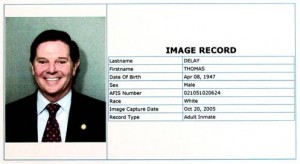 Today’s New York Times has a feature on ousted House Speaker Tom Delay’s new blog. In it, Mr. Delay, one of the more dastardly and dishonest Texans that followed this President into office, seeks money (gee, this man always seems to have his hand out) and reputation restitution. If he can do it by bypassing the filter of the news media, all the better.

“‘There is life after Congress,’ said Mr. DeLay, who at 59 has not ruled out another run for office but has said it is unlikely. His future, he says, will not include a criminal conviction in his home state Texas, where he is under indictment on money-laundering charges, or in Washington, where two of his former aides have pleaded guilty to corruption charges involving the lobbyist Jack Abramoff.”

Unfortunately, Mr. Delay’s history of exclusion and obfuscation will not fly in the citizen journalism movement where transparency and access are the accepted means to the end.

“A spokeswoman for Mr. DeLay, Shannon Flaherty, said the group was sorting hundreds of applications and would withhold approving anyoneâ€™s membership until ‘weâ€™ve checked the references.’ She said the group was concerned that liberals would try to ‘infiltrate’ the group.”

Anyway, back to the money and the blog’s true intentions:

“For an annual fee of $52, members are promised ‘insider information’ on Congress and ‘updates on the ways of combating the plans of the radical left and their associates in the left-wing media elite.'”

Ironically, his posting today actually pays homage to one of those media elite:

Don’t hold your breath, Tom. The (real and figurative) juries are still out on your fate.