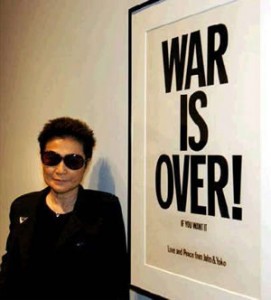 As if the Astor Family Feud wasn’t enough to sate your appetite for the private problems of the rich & famous, this morning the pendulum swings back to give Yoko Ono’s chauffeur a dose of instant kharma.

Of particular interest to PR fans: the second Mrs. Lennon has retained none other than the publicist for…Paris Hilton. Elliot Mintz had this to say:

“My overall position on all of this is that Iâ€™m not going to be engaging in a war of words between Mr. Gottliebâ€™s reckless assertions and my client,” Mr. Mintz said. “The fact of the matter is, Yoko is the victim.”

I guess Mr. Mintz’s more notorious (but suddenly stranded) client earned him the right to use the first-person singular.

In the other corner of the reputation ring stands flamboyant lawyer Robert Gottlieb repping Ms. Ono’s illegal Turkish man-servant. Mr. Gottlieb also repped that perv Peter Braunstein. (You remember — the guy who dressed up as a fireman on Halloween then started a fire to gain entry to a former co-worker’s building so he could rape and terrorize her.)

“Miss Ono used and abused Mr. Karsan by pressing him to perform immoral and, in fact, illegal acts.”

This is going to get nastier, before it ends. My advice to Ms. Ono’s lawyer: seek a gag order or settle, before your client’s carefully honed image crumbles in the court of public opinion.