In the immediate aftermath of the last major Mexican earthquake, our Mexico tourism client pleaded with us to help counter the U.S. media’s overly dramatic reports that the entire country was destroyed. In fact, the damage was isolated to just a few areas, and most of the big resort destinations remained relatively unscathed. 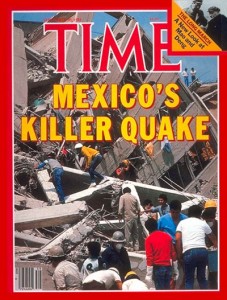 Given broadcast media’s propensity toward histrionics, and the fact that no avenues existed just yet for individuals, let alone institutions to create and disseminate content, we were beholden to the media filter to tell our side of the story. We media-trained government officials and quickly dispatched them to New York for their star turn on the network TV morning shows and elsewhere.

Significantly, we armed these spokes-messengers with visual evidence that showed the actual extent of the earthquake damage. It was in the form of helicopter-captured B-roll video footage we shot and made available via satellite and hard copy handouts to major (Mexico-feeder) market and national TV news organizations. Nearly all of them used our footage, and the fallout was eventually put into perspective.

RT @AntDeRosa: One of the smartest people I know is @rafat, he’s well on his way to another great success with @skift http://t.co/FTVXBYr3ka

Earlier today, I noticed Eric Hippeau’s retweet of Anthony DeRosa of Circa’s tweet about Rafat Ali’s burgeoning travel site Skift. (Sorry to name-drop.) I remember sitting with Rafat at Balthazar shortly after he left GigaOm, which had purchased paidContent, the influential chronicler of all things media Rafat had founded. He wasn’t yet sure of his next move, but did let on during that breakfast that he had a strong personal interest in the travel media space.

Flash forward to today, less than two years later, and it’s clear Rafat Ali’s Skift has carved out an important voice in the travel vertical space. From a profile in Monday Note:

“Thatâ€™s why Skift.com drew my attention. In less than twenty months, manned by only 9 people crammed in an mid-town Manhattan office, Skift.com has become a strong voice and a reference in the travel industry: airlines, booking systems, hotels, tour operators â€“ and all the the sectorâ€™s disruptors.”

I even convinced my award-winning travel PR pal Nancy J. Friedman that Skift is a must-follow. (She’s now a fan.) Anyway, the impetus for this post was not so much to sing Rafat’s praises, but to draw attention to a fresh post on Skift that looks at the use of drones in travel marketing. (You probably wondered why the lede about Mexico.)

It’s one thing to use video to set the record straight, but something altogether to showcase the allure of some uber-scenic resort. The advent of drones makes the once-prohibitively expensive task of aerial videography much more feasible for a much broader swath of destinations and attractions. It’s reminiscent of the gorgeously filmed PBS “Visions” series, but without the price tag.

As Rafat noted in his piece “A New Weapon Emerges in Travel Marketing: Drone Videos,”

“Drone videos are a new arsenal that travel marketers should be looking at seriously now, while the novelty wow factor lasts. There is a lot to learn from amateur enthusiasts and independent video professionals, all of whom converge mostly on Vimeo.”

Here are a couple to give you a taste of the possibilities: