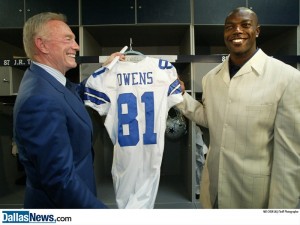 Early reports implied that his trip last night to the emergency room was brought on by a bad reaction to painkillers for an injured hand, but later police reports confirm a suicide attempt.

Terrell Owens’ publicist, Kim Etheridge, said of the incident, “This is not serious.”

Out of the loop, or programmed by TO’s lawyers, agents, and others (with a financial stake in the talented star’s future) to “make it go away?” Your guess is as good as mine, though I suspect the former.

Unfortunately, and sadly, this is not something from which one can easily hide, nor rebound anytime soon. Without being privy to the specific details — these will emerge as the day goes on — chances are that good will ultimately come from this.

Mr. Owens will finally get the mental health counseling his past behavior and actions have long demanded. In terms of career preservation, time will only tell.