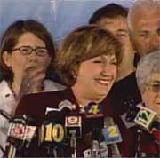 Why is it such a big story when revelations emerge that those immersed in a headline-making crisis also had paid attention to how they came across in the news coverage of that crisis? Case in point: the splash those e-mails created when FEMA chief Michael Brown fixated on how he dressed on TV.

Yesterday, we learned that Louisiana Governor Kathleen Blanco’s aides fretted (also via e-mail) that their boss did not appear in charge. (At least, the media is magnanimous when it comes to outing image-minded politicians.)

I have no doubt that Gov. Blanco worked her butt off to deal with an impossible situation. My issue is with her advisors — from the supposedly cutting-edge realm of political PR. They apparently believe they are providing a service by telling their boss how to look and what to say…as opposed to what to do. This has resulted in a dangerous theme surfacing in the media nowadays — one that connotes a general misconception of what our profession is or aspires to be. It is not words and images that are the tools of our trade, but rather tangible actions that we as professionals innately recognize will address the issue at hand.

Let the work lead and the image will follow…naturally.