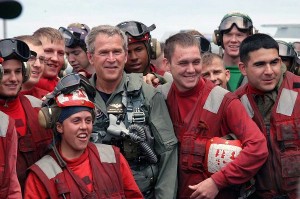 Did you know this?

“There are laws that restrict government agencies from paying for publicity without congressional approval. They include a 1913 statute that bars spending “to pay a publicity expert unless specifically appropriated for that purpose.”

This little item emerged as part of an investigative AP story that castigates Mr. Bush’s nominee for Transportation Secretary for allegedly spending some $7.8 million for outside PR services when she headed the Federal Highway Administration.

“The contracts, obtained by The Associated Press, describe the work to be performed in language such as ‘position the brand’ and ‘develop a core identity.”

Sure sounds like PR-speak to me. Assessing this story, I was of two minds. First, it seems that so many appointees in this administration are inordinately focused on image enhancement and courting public opinion than they are on governing and creating tangible programs that help people. They just don’t seem to understand that “if you build it, they [the public] will come.”

Take positive action and the PR will flow naturally. Just ask NYS Attorney General and Gubernatorial candidate Elliot Spitzer. He’ll win this election based solely on the merits of his work (and the positive PR that ensued). Let’s not forget Donald Trump’s whose presidential ambitions once seemed plausible in the wake of his audacious effort to re-build NYC’s Wollman Skating Rink, or Rudy Giuliani’s current aspirations after his decisive actions following 9/11 (though some now dispute that).

My second impression was a little more disconcerting…at least from the perspective of a PR careerist. Why is the use of public relations invariably viewed in a negative light? Why do so many journalists cast the retention of a PR firm as an effort to distort or obfuscate the truth? What if the government introduced a new drug benefit program without any accompanying effort to alert and educate those who’d benefit from it? What if the Tsunami alert system detected an underwater earthquake, but there was no PR plan in place to get the word out?

“…the Bush administration spent more than $88 million on PR contracts government-wide in 2004, a 128 percent increase over the amount spent in 2000…”

Much of this is legitimate and warranted. Still, I believe this administration’s over-zealous misuse of PR — versus creating legislature and programs that elevate (and protect) all — may have enriched the PR industry, but at the expense of its reputation.