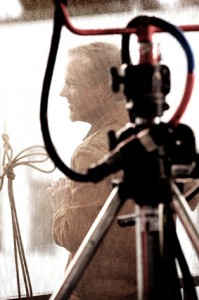 I’ve been thinking about the return to television of “24,” the tense, terrorist-inspired weekly drama whose ticking digitized clock gave “60 Minutes” stopwatch a run for its money.

The gripping Fox TV series, which fulfilled the Republicans’ playbook for inciting homeland fear, disappeared from my home screen eons ago, and will soon return to a much changed (and still receptive?) political environment.

The show’s nearly two-year hiatus had something to do with a writer’s strike and jail time for Kiefer Sutherland, who plays the torture-loving patriot Jack Bauer. While Kiefer was in the slammer, TV viewers had to settle with his father who plays the patriarch on one of the dopiest shows on TV, “Dirty Rotten Money.”

Anyway, “24” returns to broadcast TV with a two-hour special on November 23, followed by a four-hour “season premier” on January 11 and 12. Already, the buzz has started. The L.A. Times reports: “Fox’s ’24’ is planning to kick off its seventh season not with a car chase or gunfight but with an art show” featuring photos of its 35mm shoot on location in South Africa.

In spite of Fox (News’s) penchant for propping up the Bush Administration these last seven years, I didn’t hear a single TV pundit reference the possible role the show played in paving the way for red-staters (and others) to accept an African-American as U.S. President. After all, actor Dennis Haysbert served our nation most admirably in his role as President Palmer (rhymes with Obama) in the top-rated TV series. What do you say about that, Nate Silver?

Anyway, it’s curious that season seven of “24” will feature a woman as president, played by Cherry Jones. Could life imitate art again? If so, I sure hope we’re talking Hillary and not that numbnut from Alaska.