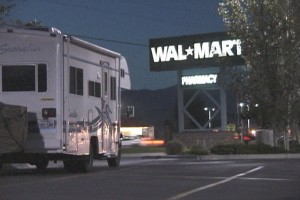 In case you haven’t noticed, PR people, there’s a pot-a-brewing over the exposed astroturfing initiative by Wal-Mart and, allegedly its AOR.

Lots of PR bloggers jumped onto the naysaying bandwagon when it was learned that the couple traveling around the country in an RV and blogging about the virtues of America’s biggest retailer were actually hired hands by Wal-Mart’s PR consiglieres. Fans of Wal-Mart they may be, but handsomely paid fans nonetheless.

The rub, of course, lies in the fact that the drivers of the PR revolution supposedly have a hand on the RV’s steering wheel.

Business Week exposed the ruse. MediaPost picked up on it. PR blogger John Wagner chimed in. Kevin Dugan amplified it. Now ZD-Net has weighed in. And I’m sure I’m missing scores of others.

The big hole in the story? Where’s Richard (and Rubel) during this maelstrom surrounding one of their agency’s most high profile clients?

I actually posted a comment on Constantin’s weblog over the weekend suggesting we cut Richard some slack, e.g., give him some time to formulate a measured response.

After all, as good as the work Edelman is doing for Wal-Mart, I’m sure the client wishes to weigh in on this sticky wicket. This takes time, but my bet is that we’ll be hearing from Richard sooner than later. He is a true believer, though probably a tormented one right now.