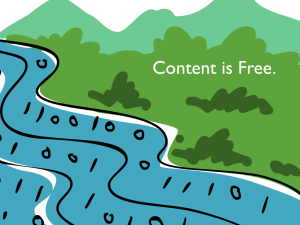 One can’t help but notice the brouhaha that Malcolm Gladwell tipped with his prominent dis-endorsement of Chris Anderson’s latest book Free.

His New Yorker magazine review of the timely tome, which portends an age where all media content shall be set free, prompted many in the Twittersphere to weigh in (mostly in favor of Mr. Anderson’s perspective).

Here’s a smattering of what the pundits had to say starting with Mr. Gladwell:

This debate shows no signs of abating. Last week, it was the veracity of citizen versus traditional journalists. This week it’s a continuance of the discourse on what business models can work in an age of diminished audiences, ad spends and CPMs. I guess I’ll head over to Michael’s next week to hear directly from Mr. Anderson.