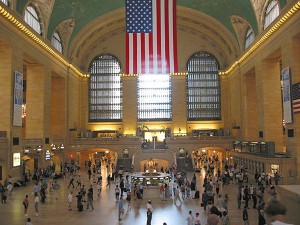 One of New York City’s great attributes lies in its citizens’ indifference to celebrity sightings and nonchalance toward the unusual. It’s almost as if the 8.2 million New York City residents have seen it all. Very little can phase them, and respecting another’s privacy actually means something.

At the height of the M*A*S*H days, I’ll always remember how mortified former client Alan Alda was when our limo went MIA outside the RTR following a press lunch. We wound up walking from West 57th to East 55th unfettered, i.e., without a single Gawker Stalker.

New Yorkers certainly have seen their share of PR stunts, including the one over the weekend wherein some numbnut thought it was a good idea to dole out money in Union Square, an area of the city that retains the vestiges of the homeless and disenfranchised in spite of the well-healed shoppers at the Greenmarket.

PR Princess Claire Celsi picked up on the near-riot that ensued from the ill-conceived, though admittedly news-generating promotion, which seemed to work in San Francisco

Some PR stunts take place for no apparent reason or beneficiary. Here’s one that’s tailor-made for anyone who’s ever passed through New York’s Grand Central Station. Watch the video. It’ll give you the heebie-jeebies.