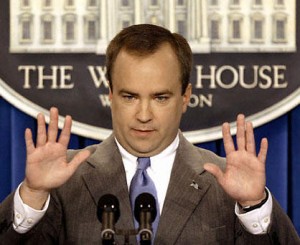 In what can only be characterized as a cleansing of his soul, Politico today broke the exclusive that former Bush mouthpiece Scott McClellan, a once-frequent subject of this blog, has penned a tell-all. And we hear it won’t be pretty for his former puppeteers.

“The eagerly awaited book, while recounting many fond memories of Bush and describing him as â€œauthenticâ€ and â€œsincere,â€ is harsher than reporters and White House officials had expected.”

You have to give McClellan credit for eventually telling it like it is after three years of spinning it like it isn’t. We’re still waiting fo Mr. McClellan’s first PR boss at The White House to fess up after deceiving the nation into war, among other things. Ari Fleischer’s book was just an extension of his misguided years serving a corrupt administration.

Conversely, the title of McClellan’s book tells it all: What Happened: Inside the Bush White House and Washingtonâ€™s Culture of Deception (Public Affairs, $27.95). In it:

â€¢ McClellan charges that Bush relied on â€œpropagandaâ€ to sell the war.

â€¢ He says the White House press corps was too easy on the administration during the run-up to the war.

â€¢ He admits that some of his own assertions from the briefing room podium turned out to be â€œbadly misguided.â€

â€¢ The longtime Bush loyalist also suggests that two top aides held a secret West Wing meeting to get their story straight about the CIA leak case at a time when federal prosecutors were after them â€” and McClellan was continuing to defend them despite mounting evidence they had not given him all the facts.

â€¢ McClellan asserts that the aides â€” Karl Rove, the presidentâ€™s senior adviser, and I. Lewis â€œScooterâ€ Libby, the vice presidentâ€™s chief of staff â€” â€œhad at best misledâ€ him about their role in the disclosure of former CIA operative Valerie Plameâ€™s identity.

By contrast, when some star-struck PR group invited Mr. Fleischer to New York to promote his book to a sold-out gathering of PR lemmings, I was tempted to remind him that PRSA’s code of ethics mandated resigning a client if the client knowingly lied. What did he think about that? (I held my tongue.)

McClellan, to his credit, finally comes clean, sort of, but only after the Bushies unceremoniously cut him loose.

â€œI had allowed myself to be deceived into unknowingly passing along a falsehood,â€ McClellan writes. â€œIt would ultimately prove fatal to my ability to serve the president effectively. I didnâ€™t learn that what Iâ€™d said was untrue until the media began to figure it out almost two years later.”

Huh? He didn’t learn that what he said was untrue until the media began to figure it out almost two years later. Hmmm. Highly dubious.