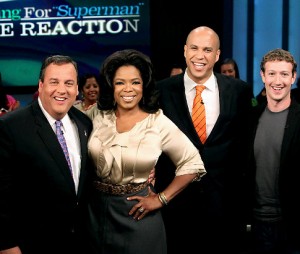 Maybe I’m in the minority, but I found Mark Zuckerberg’s character, as deftly played by Jesse Eisenberg in “The Social Network,” to be somewhat appealing in a strange way. Jarvis, on the other hand, calls the film “anti-social.”

Aside from his weirdly contorted smile, social insecurities, lack of personal empathy, and that misogynist opening scene, Zuckerberg comes off as super smart, driven and, believe it or not, reasonably grounded — at least compared to Justin Timberlake’s Sean Parker.
I had the good fortune to attend the Mashable-hosted screening of the SONY film last night on West 23rd Street where I saw editor Adam Ostrow, and his colleagues Adam Hirsch and Vadim Lavrusik, PR vet Drew Kerr, and NYU’s Jay (“Why I am not a journalist”) Rosen among the crowd of watered down filmgoers, including a good share of Columbia J School students. En route into the theater, we were all asked to relinquish our camera phones. No screen shots or tweets emanating from this theater!

But back to the Zuckerberg character, and all the expert predictions of how the film will have a deleterious effect on the reputations of the Facebook founder and brand.

Who can count the myriad stories and posts, including a few from this blogger, portending a Social Network-driven PR disaster for the company? And the Oprah-fueled news of Mr. Zuckerberg’s $100 million donation to the Newark, NJ school system raised more than a few PR pundits’ eyebrows considering its timing with the film’s release.

Still, Zuckerberg denied it, as did the film’s producer Mike DeLuca:

“I think he’s joining the list of very benevolent philanthropic billionaires in our community and in the world, and it’s only a good thing,” continued De Luca of Zuckerberg, who was just valued at $6.9 billion by Forbes. “It’s the honest-to-God truth. Anybody who does it.”

In the end, I found the Zuckerberg character in the film to be some kind of a hero, not unlike Russell Crowe as John Nash in “A Beautiful Mind” or, dating myself, Matthew Broderick in “War Games.”

The public simply likes smart aleck geniuses, and Zuckeberg in this film is the smartest and perhaps most tart-tongued character I’ve seen on the screen in a long time. He even tempered his manic behavior by showing earnest concern when confronted with two moral transgressions in his midst (one possibly of his own making) in the early days of the fledgling social net.

On the other hand, his adversaries, the Winkelvoss twins who sued Zuckerberg for stealing “their idea,” come off in a much less flattering light (and I say this with a son who’s currently a varsity athlete and member of a final club at Harvard).

In the end, I wonder what all the fuss was about. Could Zuckerberg have saved himself $100 million, or minimally, have delayed the timing for his gift to Cory Booker? I wouldn’t go so far to say that the company should be officially promoting this film. On the other hand, I do expect The Social Network to be a box office bonanza, and ultimately accrue positively to the company’s fortunes, if not to the legend of its enigmatic founder.