The venue was different, as was the average age of the presenters. But that was all that had changed.  The energy from the stage and the warm embrace from the always sold-out audience at this month’s New York Tech Meetup remained palpable. In fact, I sensed even more electricity in the room in spite of the event’s temporary uptown setting at the 92nd Street Y.

Back in July, I cajoled my #2 son, a newly minted college graduate now toiling in technology M&A in San Francisco, to join me at NYU Skirball. Last week, my #3 son, a college sophomore on a week-long break, joined me. We found ourselves a few seats away from former NBCUni chief Jeff Zucker at his second NYTM. He (again) brought his school-aged son along for the ride. Smart.

This particular NYTM was billed as the “second annual academic meeting.” It featured presentations by student coders from mostly New York-area colleges and universities, all devout worshippers at the temples of Dennis (who was in the audience), Naveen, Jack, Ev and Biz.

The NYC-as-tech-incubation-engine meme will only continue to grow thanks to Mayor Mike and the imminent selection of one or two prominent academic institutions to build a technology research center within one of the city’s five boroughs. The list of those vying for the $100 million in incentives include Stanford, Cornell, Carnegie Mellon, Columbia, NYU, Rockefeller University and India’s Amity University.

But enough with the set-up. The evening opened with the usual sponsor and event announcements. NYTM’s executive director Nate Westheimer turned the podium over NYTM managing director Jessica Lawrence who introduced Evan Korth, Faculty Liaison for Technology Entrepreneurship and CS professor at NYU as well as co-founder of hackNY. He took the reins from Nate as the evening’s guest moderator. 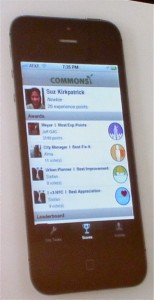 We opened with a fashion-challenged Otavio Braga who demo’d BodyJam, a melding of augmented reality and one’s wardrobe. I found it reminiscent of Clothia from the March NY Tech Meetup. Here’s a short video clip above.

All New Yorkers have come to appreciate Mayor Mike’s 311 number as a channel to help make our already very civilized city even more so.  Now what someone incentivized social-minded New Yorkers to report potholes and unusual doings on the city’s streets?  With Commons, Suzanne Kirkpatrick has tapped the city’s API to do just. Her app rewards the civic-minded with badges and a place on a leader board for reporting ways to improve the city. Nice work, Suzanne, and kudos to Rachel Sterne and the NYC Big Apps program too for encouraging such government innovation.

I also liked Grafighters, a game that lets anyone draw a character and enter it into an animated fight. What’s neat: the software recognizes the physicality and other factors of one’s creation to weight its prospects for winning. See below.

The mythic quality of the Zuckerberg character in “The Social Network” no doubt ratcheted interest in coding well beyond geekdom. Taking this cue, the creators of Codecademy have set out to make it easy for anyone to learn to code.  Once you learned, try finding a Hackathon to put your skills to the test. We heard from the founders of Hacker League, which seeks to crowd-source and list Hackathon events around the country.

And since we’re in the realm of academia, what if you learned your chemical bonds on an iPad? The Times’s Matt Richtel this week penned a piece on Apple’s fam trips for school admins to Cupertino, a couple days after presenters from NYU-Poly showcased Lewis Dots on an iPad to help chemistry students better visualize and manually manipulate how those atoms bond.

The crowd loved LoCreep, which re-enacted a bar scene wherein a creepy-looking guy (wearing a wife-beater shirt) put the moves on a tech-savvy young woman. She gave him “her number,” which, by dialing, automatically registered the creep on the LoCreep site. His creepy follow-up voice-mail only added to his “creep factor.”  My son and I loved the concept, but were dubious about its commercial viability. Lots of fun and a great skit! See above.

Another crowd fave was Bluefin Labs, which aggregates the online conversation, specifically around television programs from which the company produces real-time data sets and accompanying graphics to help TV programmers/advertisers better grasp viewer engagement. The audience, clearly cognizant of the growing social TV phenomenon, sat in rapture as MIT’s Deb Roy presented. Jeff Zucker, who knows a thing or two about analyzing television viewer data, was less ebullient when I asked for his opinion.

Talking about advertisers, the team at AdRunner developed an animated game that challenged the players to dodge the ads coming at you. If you crash into one, you’re subjected to the pitch. Yikes.

The end of the evening featured two music-oriented applications. MIDIphon, which won the 4th annual hackNY Hackathon, showcased a mobile device as musical instrument that allows up to 16 users to each “play an instrument” via their iOS devices.  The other music presentation came from some folks at FIT who developed open-source wearable instruments (FIT, wearable — makes sense).    We finally heard from a CS professor at Rutgers who planed to show as true automation of everyday household objects, each with their own IP addresses.  The demo didn’t work as planned, but the professor was engaging and the audience appreciated the effort.

My #3 son was glad he attended his first NYTM, and even checked out Codecademy when we got home.  I don’t think he’ll change his major from Political Economics to CS, but having a little coding acumen in one’s personal or professional tool kit clearly can’t hurt.

Photos/Video: Peter Himler with a Canon Sureshot SX20 IS