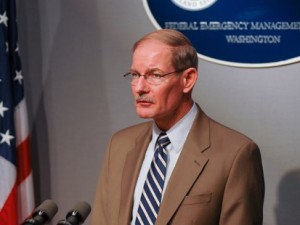 Some believe that the process of preparing newsmakers for interviews, i.e., media training, is evil. I’m not one of them. After all, why avail oneself for an interview without a POV and an action plan to bring it to life? And who said that those behind the camera should be the only ones to have their editorial agendas addressed?

The simluated interview tends to comprise the most telling aspect of the media training. It not only exposes the trainee to likely media questions, but said trainee can see first-hand how he or she looks and delivers…or not.

It’s that last item that has me thinking this rainy Friday evening in New York. The simulated news conference typically consists of PR staffers tossing prepared questions at the trainee behind a podium. It can be very effective, especially if you toss a few zingers in the mix.

This week, FEMA called a hasty news conference to update the media on the California fires. Few if any journalists arrived at the scheduled start time, so FEMA’s emergency PR plan went into effect. The communications staff took seats in the audience and the presser began – with the FEMA staff posing the questions (no zingers, many softballs).

No, I promise I’m not making this up (even though many readers of this blog can empathize with the temptation to “paper the house” at a no-show presser). It’s unsettling to say the least. But would any of us seriously consider faking it?

QUESTION: And from what we understand, the questions were posed not by reporters but by staffers. And that distinction was not made known. Is that appropriate?

PERINO: It is not. It is not a practice that we would employ here at the White House or that we â€” we certainly donâ€™t condone it. We didnâ€™t know about it beforehand. â€¦ Itâ€™s not something I would have condoned. â€¦ FEMA is responsible.

Had the Washington Post’s Al Kamen not exposed the ruse, would Ms. Perino even have bothered to apologize, I mean shift the blame?