Leave it to Jeff Domansky (aka @theprcoach) to draw this blogger’s attention to a rant by one of the more astute observers of today’s tech scene – Sarah Lacy (aka @sarahcuda).

Writing for her thought-leading tech news site PandoDaily (which just hired Fast Company‘s Adam Penenberg as its editor), Ms. Lacy rails into some PR numbnut who had the temerity to request that the site reprint a pre-packaged “news” article about his client:

‘We are looking to release this story next week and wanted to see if you would cover it. We are an Angelpad company that has now pivoted and were recommended to connect with you.

Here is what we got written up. Do you think we can get this or something similar out by next Tuesday?’

In case you are not sufficiently outraged, let me explain what just went down. A company pivoted (read: failed) and decided it wanted some positive press. So it paid someone to write a story. Not a press release or a guest post, an actual fake news story, paid for and produced by the company. And it is now sending it around to tech blogs, asking if people who have forgone easier and more lucrative careers choosing instead to report and write news for a living can just cut and paste it under their own bylines. Or, you know, ‘something similar.'”

Much has been written about today’s new marketing paradigm wherein executives grapple with the interplay between earned, owned and paid media to advance their clients’ interests. From my earliest days in the PR biz, we had to “earn” the attention of editorial decisionmakers. As the tools to create and syndicate “owned” content proliferated, organizations, companies and individuals morphed into media companies, as Tom Foremski declared.

Sometimes paid content can lead to earned content as Richard Edelman recounts in his post about how a paid deal with Buzzfeed catalyzed editorial coverage (and social buzz) for Edelman client Schick. In fact, I’ve written previously that one might measure his or her success by the amount of social buzz such an integrated campaign generates. (But that’s a post for another day.)

In recent years, we’ve seen a hybrid of earned and owned media emerge that’s a bi-product of new journalism models. I wrote a while back about how The Huffington Post has redefined journalism through content aggregation and by publishing bylined articles from outside experts (paid and otherwise).

And just this week, Forbes.com’s Lewis D’Vorkin, no stranger to traditional journalism, described the renewed vitality his site has experienced with its model featuring outside non-staff contributors (of which this blogger is one). My pal Dorian Benkoil captured it in a MediaShift piece yesterday.

But back to Sarah Lacy’s take-down of a naive PR person who didn’t do his homework when trying to earn Ms. Lacy’s editorial affections. Earning media coverage is alive and well, but it entails a most delicate dance with often unwilling partners who have little patience for those who don’t get how real journalism works. Sarah Lacy added:

“Whatâ€™s more: This is not the only request like this we got this week. Itâ€™s actually becoming a mini-trend. Increasingly over the last few months I find myself saying the words, â€œLet me explain how an independent press works to youâ€¦â€ and â€œMy staff works for me, not you. Itâ€™s going to go down like this, or weâ€™re not going to do the story at allâ€¦â€ and â€œNo, you can not read the story and offer feedback before it runs.â€ I doubt I would have to give this many lectures on the fourth estate, if I made a time machine and traveled back to cover startups in the USSR.” 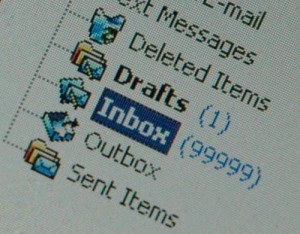 And I’m delighted to hear it. I’d much prefer an independent press taking the time to properly evaluate, and hopefully report on, my clients’ product or service than some canned re-write of a press release. Unfortunately, the challenge to make a meaningful connection is as difficult as ever given the number of superfluous emailed PR pitches filling reporters’ inboxes nowadays.