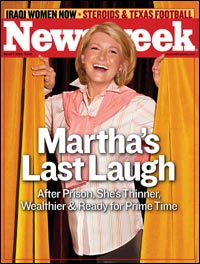 Conventional PR wisdom tells us that Ms. Hilton’s 45-day lock-up will make the bubbleheaded caricature relevant once again. The AP grabbed a couple of PR types to offer up the usual observations in the age of celebrity:

“It will actually increase her star appeal in a very sick and demented way,” said longtime publicist Michael Levine. “Thereâ€™s a segment of our society thatâ€™s somehow engaged in the soap opera that is Paris Hilton, and this is a very compelling plot line in the soap opera.”

“The premise of her fame is being naughty,â€ he said. “This is a career move for her. It simply fuels the fascination. She can only win with this,” offered crisis manager Roger Gillott.

Now, what if some expert surprised us by opining that Ms. Hilton’s jail time will actually hurt her “career.” After all, the dimwit was driving her Bentley with the lights off — legally drunk and with a suspended license. Shouldn’t we consider all the lives lost due to DWI before casting our lot with this numb nut?

Fat chance. Rather, Ms. Hilton’s time in prison will rival Martha’s for sheer media frenzy. Stay tuned for her over-the-top re-entry into (faux) society when she’s set free. “ET” and “Extra” already are chomping at the bit. One thing’s for sure: justice will not have been served.

Paris, here’s some PR advice: show some contrition for your latest transgression. (FYI – Contrition means “Sincere remorse for wrongdoing; repentance.”) Elliot, don’t you agree? I mean even New Jersey Governor Corzine gave himself a ticket for his moving violation.

Update: Hilton Sacks Publicist. After all he’s done for her?! She deserves the brink. Publicist Elliott Mintz:

“Due to this misunderstanding, I am no longer representing Paris. For the record, I have nothing but love and respect for Paris and her family. Paris is a wonderful person and does not deserve the punishment that was handed down by the court. I only wish her my best.”

Now what does he really think?