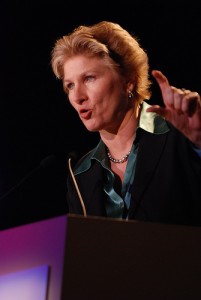 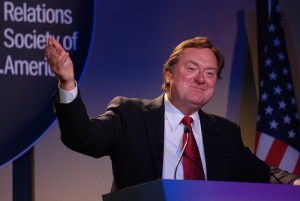 I am a huge Tim Russert fan. The “Meet the Press” host, and arguably the Beltway’s most influential journalist, addressed the throngs attending the PRSA Conference in Philly this morning. He cogently and buoyantly walked the crowd through the windy political road that started with the Supreme Court crowning of George W. Bush as POTUS to the 9/11-induced melting of all partisan bickering to today’s domestic and foreign…political, economic and reputational quagmire into which Mr. Bush has led our nation.

What surprised and reassured me most about Russert’s presentation was the non-partisan, journalistic manner in which he laid out the sordid facts. Trust me, if O’Reilly or Olberman keynoted, the substance and tone would have taken a markedly different turn. Fortunately, this particular audience (hopefully) can recognize the difference between commentary and news. Russert’s a news man through and through.

Talking about partisanship, the luncheon keynote featured this President’s hand-picked PR ambassador, Karen Hughes, who’s charged with enhancing the nation’s reputation abroad. I twittered on her speech as it was happening, but suffice to say, it featured a considerable amount of rhetoric from this “honors graduate” of that bastion of (Texan) intellectualism – SMU.

While some of the initiatives she cited, e.g., student exchanges, Arab-Americans mingling abroad, a tour of a hip hop band…sounded promising, I just couldn’t bring myself to erase from my mind the memories of her first PR stint at the White House when she was complicit in perpetrating the biggest fraud on the American people in our nation’s history. PRSA, couldn’t you have found someone more honorable? Even Ari Fleischer, well, perhaps not.