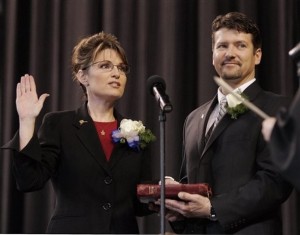 We awake today to news of a 21-page novel published last night by the McCain campaign to pre-empt what’s expected to be a negative report on Mr. and Mrs. Palin’s efforts to abuse the Alaskan governor’s office.

In case you’ve been out of the country, a bi-partisan legislative task force has been looking into charges of political cronyism by the first family of Alaska. That report will be issued today despite the attempts by legions of highly paid Republican lawyers to quash it.

Instead of waiting for the bombshell to hit and without knowing what the report will even say, Karl Rove’s disciples in Bush/McCain-land have created their own version of these sordid events – events that elucidate on Mrs. Palin’s character and prospective governing style should the clueless hockey mom ascend to national office.

Personally, I wonder what her high school-educated secessionist oil worker husband was even doing meddling in state affairs. But then again, isn’t this the governor who doled out high-paying state jobs for all her high school friends? (Shades of Brownie.)

As for the obfuscators PRopping up McCain, you have to hand it to them. They’ve created their own history rather than be forced to play catch up once the truth emerges today. They’re insidiously effective because they anticipate and pro-actively pre-empt the landmines that lie ahead. These are the same fellows, btw, who produced contradictory TV spots prior to the bailout vote – one for each outcome.