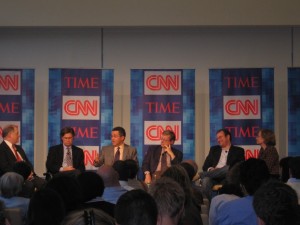 What a great idea. Hand it to the folks at Time-Warner (and to Digital Hollywood’s Victor Harwood) for pulling off this impressive gabfest with many of today’s most prominent political pundits.

The speakers included a veritable who’s who at the intersection of politics and journalism. Details here, but suffice to say, it was cool to hear their insights without the manacles imposed by some of their news organizations.

Also, it was great seeing so many familiar faces in the overflow crowd including Fenton Communications’ namesake David Fenton, Portfolio‘s Jeff Bercovici, BusinessWeek‘s Jon Fine, BuzzMachine’s Jeff Jarvis, The Times’s Saul Hansell, HBO’s Richard Plepler, Time-Warner’s Ed Adler, Beet.TV’s Andy Plesser, Huff Post’s Rachel Sklar and the MPA’s Howard Polskin, among others. After cavorting for while, I did manage to tweet several of the sessions. Here are some highlights. More tomorrow.

CNN’s Candy Crowley: “What’s hard. The line is so blurred between commentary, analysis and reporting…there’s something very different between what I do and what let’s say Roland Martin does.”

Burson-Marsteller’s Mark Penn: “I think Hillary was pretty well accessible…she held a lot of off-the-record meetings…I think we were out there more often than opponents…”

On success in breaking ties to the Bush years:

The New Yorker and CNN’s Jeffrey Toobin: “It’s not just Bush…think about Obama’s successful campaign…he has captured something…I remember seeing a photo of Senator Obama with the headline: ‘Cool the Fuck Out. I Got This.'”

Was Sarah Palin a mistake?

Talking Points Memo’s Josh Marshall: “Palin was a mistake; emblematic of McCain’s shoot from the hip, histrionic approach…within 2-3 days of her selection, there was speculation that she may be pulled from the ticket…“

On McCain’s prospects for overcoming his deficit in the polls:

Jeff Toobin: “…the macro forces are so much aligned against mccain – because of republican legacy…”

The National Review‘s Byron York: “McCain’s drama is in extreme contrast to how Obama behaves…”

Josh Marshall: “McCain’s dug a hole; her has lurched in so many different directions….that any campaign proclamation wouldn’t help”

But Jeff Toobin summed it up by saying that what the candidates say right now means nothing, …”unless there is an event – eg, another vice presidential choice, nothing matters…”

Other coverage from day one of the Summit can be found here: