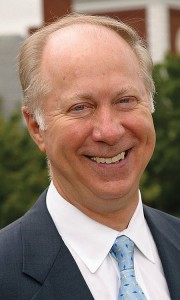 The Council of PR Firms executive director Kathy Cripps had a twinkle in her eye as she looked out across the expanse of The Yale Clubâ€™s Grand Ballroom in New York City yesterday morning. In spite of these recessionary times, the Councilâ€™s annual Critical Issues Forum drew a full house and a fair share of industry luminaries, many of whom are featured in this video.

The always provocative and engaging Len Schlesinger, now president of Babson College, and formerly a top business executive and Harvard B School professor, handled moderating duties with his usual aplomb.

In the crowd, I was able to spot Harold Burson, MS&Lâ€™s Jim Tsokanos, Lou Capozzi, outgoing Council president and Ketchum CEO Ray Kotcher and his colleague Rob Flaherty, president of Ketchum who doubled as the eventâ€™s host, Ralph Katz, Andy Cooper and Anne Green of Cooper Katz, Maureen Lippe of Lippe Taylor, Abby Gouverneur Carr of Bliss PR, Lynn Casey of Padilla Speer Beardsley, F-Hâ€™s Nancy Seliger, and too many others to recall.

Of course, my trusty digital audio recorder was battery-challenged so I was only able to get a few choice audio bites from the panel discussion (that I thankfully tweeted). The conversation focused on how to re-build public trust in corporate America and the sorry state of the news media. Hereâ€™s a random smattering of paraphrased sentiments:

Susie Gharib recommended that the audience go see Michael Mooreâ€™s latest film if only for the simplistic way in which it shows how we got into this mess in the first place.

Jim Wiggins: We â€˜get itâ€™ on the issue of executive compensation. Though it will probably not be enough to satisfy Michael Moore.

Susie Gharib suggested Goldman Sachs take its $20 billion in bonuses and “give it to people who don’t have jobs or homes.” (which prompted this PR person to interject from the audience “It would be seen as a PR ploy.”)

Susie Gharib: I agree with public perception of media as being biased. Old style objective journalism is dead…except at PBS

Beth Comstock: At GE, it’s a fundamental re-set. We don’t see things going back to where they were. One statistic says that jobs won’t return until 2017 in this new re-set world.

Following the panel, we broke for lunch during which David Gergen and Len Schlesinger took the stage. I donâ€™t know if itâ€™s his southern and mellifluous cadence, but one could easily understand why Mr. Gergen has served as an advisor to a handful of U.S. Presidents across both sides of the political aisle.

Were entering a new normal. The old normal is not returning.

Business is not off the hook. It’s on probation.

This year at Harvard Biz School. students self-organized to take an oath to serve the public good (70% took it)

The viciousness of blogosphere has migrated to cable, (eg, Olbermann, Oâ€™reilly)

If the pendulum doesn’t swing back, we’re going to entertain ourselves to death (on the type of news programming weâ€™re seeing)

All in all, the Council should be proud of the timeliness and overall substance of yesterdayâ€™s discourse at the Critical Issues Forum. More tweets can be found by Twitter-searching this hashtag: #CIF09.