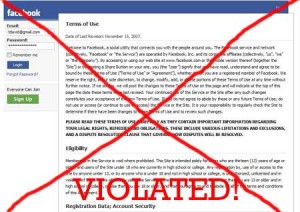 I knew the moment the news broke that Facebook was in for a rough patch in the court of public opinion. For those of you in the Bahamas or on the slopes this week, on Monday news broke that Mark Zuckerberg and company decided to alter the terms-of-service (or TOS) on the dominant social networking platform.

The change, which in essence decreed that all content uploaded onto the site was now “owned” by Facebook — not you, the uploader.

A firestorm naturally erupted, and to his credit, Mr. Zuckerberg took to the Facebook blog to explain and hopefully quell the criticism. It wasn’t enough. The damage was done. Today, Facebook relented and the controversial ownership terms were summarily retracted.

Now I don’t want to delve too deeply into the merits or demerits of Facebook’s TOS play. The subject certainly was covered ad nauseum across the media and micro-blogosphere these last couple of days. Rather, I’m reminded of Mr. Zuckerberg’s last PR gaffe that involved a little monetization scheme called Beacon, which in essence, gave Facebook’s paid sponsors access to the network’s users personal info. That squirrely scheme also was eventually retracted.

It’s unclear who’s advising the Facebook executives on reputational matters, but what is clear is that the public outcry these controversial moves spurred could and should have been avoided. The best in our business actually earn their $400 hourly fees for anticipating how the public will respond to potentially problematic business decisions. And if you think that fee is excessive, consider what Warren Buffet once said:

“It takes 20 years to build a reputation and five minutes to ruin it. If you think about that, you’ll do things differently.”

The real value seasoned PR pros offer seems to be in short supply at many tech start-ups, even the most successful ones. It has less to do with the number of journalists or bloggers the PR person knows, or even his or her ability to craft a sticky story line. The real value lies in one’s intrinsic sense of how a “public” will react to various outputs — a skill that is only honed after years of wallowing in the mud.

I don’t want to second-guess the youthful Mr Zuckerberg. I’m sure there are legitimate business reasons for tooling with Facebook’s TOS. I just wonder if he might have avoided the maelstrom by using his blog to secure input (and buy-in) from the FB crowd before unilaterally making the contentious change. Just a thought.