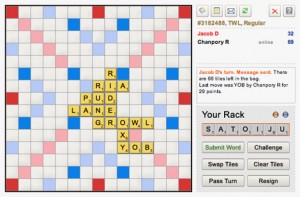 Do you, like me, sense that the venerable game of Scrabble is making a fabulous comeback? (Did it ever go away?) Our family got the bug two summers ago, and we now can’t seem to shake the habit.

Just this week, my boys had the mini Scrabble board out on the plane to Denver, and then again on the drive from the airport to Vail. We had to put an end to the backseat brotherly bout after my oldest prompted a rather loud debate by insisting that “qi” is a word.

My old friend, colleague and client Wayne Charness and his colleagues at Pawtucket-based Hasbro must be pleased, I think, by the renewed vitality of their word-worthy, and now socially networked board game. The new issue of Wired even has a piece on the Scrabble frenzy titled “Confessions of an Online Scrabble Cheat.”

What’s more impressive: the Scrabulous application on Facebook may be the fastest-growing in all of Mark Zuckerberg’s burgeoning empire. It’s a veritable “triple word score” with 333,456 daily active users comprising 16% of total Facebookers. Not bad, except for one problem: Hasbro doesn’t own the application. Here’s an item from Hasbro’s hometown paper:

“A version of Scrabble, Scrabulous, has caught on big-time on Facebook, the immensely popular social networking site. The program, based on the board game sold by Pawtucket-based toymaker Hasbro Inc., was introduced this summer. It now has more than 20,000 users, according to a small item in The New York Times’ business section. The only problem? The creators of Scrabulous, two software developers in India, never got permission from Hasbro to create the online game. According to the Times, ‘they wrote to Hasbro to make sure they were not engaging in copyright infringement. The brothers say they never heard back from the company.'”