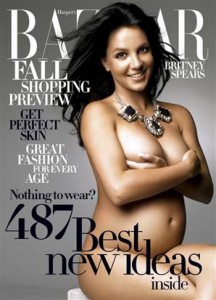 In the category of “been there/seen that,” today we get the first glimpse of an airbrushed, hair-dyed, big-bellied Britney on the cover of Harper’s BAZAAR.

The tactic of splashing an exposed, expecting entertainer on a glossy magazine cover is nothing new, though we do learn that this is a first for Hearst’s century-old fashion book, obviously looking for a boost in single-copy sales. But that’s the only first.

I suppose the impression Ms. Spears left with “Today” and “Dateline” viewers was not exactly what her Ob-Gyn ordered. (Though this shoot likely pre-dated the Matt Lauer interview.)

Frankly, I wouldn’t have advised my client to pose for something gratuitous like this (or the Lauer interview) when the only benefit lies in the preservation of her celebrity. Even Jessica Simpson and Paris, yes Paris, have legitimate reasons to exploit themselves media-wise. Both have new music product.

I’d be curious to learn what Annie Leibovitz thinks of the image? For the authentic version, check out Ms. Leibovitz’s photo retrospective opening at the Brooklyn Museum in the fall.