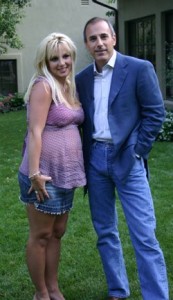 I’m not obsessed with Britney Spears, but boy did she ever take her trailer park look to the next level for her “Dateline” interview with Matt Lauer! The usually plugged-in “Page Six” attributed the train wreck of a look to the absence of “her handlers:”

“‘Neither of her publicists, Leslie Sloane Zelnick or Nanci Ryder, showed up,’ said our source. Spears insisted on doing her own hair and makeup – a regrettable decision.”

At one point, during Ms. Spears’ tear fest, one of her fake eyelashes fell off, which prompted her handlers to make a post-interview request of NBC PR to not feed that clip to any of the early fringe syndicated entertainment shows.

When asked why Ms. Spears was left alone to fend for herself with the NBC crowd, her publicist quipped: “Britney is a grown-up and makes her own decisions.” (Shades of Michael Jackson before agreeing to appear in that British documentary?)

Truth be told: few journalists care to have a meddling (i.e., controlling) PR person hovering over an interview. On the other hand, the occasional gentle suggestion from a savvy PR pro can go a long way to satisfying the goals of both parties. As for make-up and hair, that’s better left for others…at least on this coast.