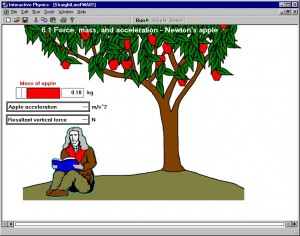 Steve Rubel this week links to the following post with his usual aplomb: “I guarantee this will be on the front page of digg, memorandum and del.icio.us in no time.” The thoughtful diatribe from Jackwhispers takes apart the seemingly invincible Steve Jobs.

Are we seeing the seeds of a Newtonian backlash against Apple, i.e. “Every action has…?” This morning, on the heels of this non-conforming take on Apple, The New York Times’s Joe Nocera dresses down the company with the same zeal recently accorded Dell by citizen journalist Jeff Jarvis .

While Apple basks in the luminescence of its iPod screen, it seems the company is precarious poised to take a fall. Newton doesn’t discriminate. He also works in both directions. Even Bode Miller, who recently hit rock bottom in the PR department, is positioned to rise again…maybe even to new heights. (I call it the Paris Hilton strategy. Misbehave. Make headlines. Get famous, then rich.) Many had written off Mariah Carey. This week she received eight Grammy nominations. My prediction: she’ll win most.

For enterprises, there are countless cases of once high flying and presumed immortal companies that ultimately fell from grace for drinking too much of their own Kool-Aid.

As PR practitioners, we need to more fully understand (and anticipate) the inevitable forces that can/will topple an enterprise following a prolonged stay in the adulatory spotlight. Arrogance doesn’t help, notes Mr. Nocera:

“At this particular moment, of course, Apple is special, and it can get away with being arrogant. It has a product that everyone wants, and for which there is no serious competition.

A final note: You may have noticed there is no Apple spokesman defending the iPod or Apple’s customer support in this column. When I called Apple, wanting to know, among other things, how long Apple believes an iPod should last, I got a nice young woman from the P.R. department. She said she’d try to find someone at the company to talk to me. That was on Wednesday.