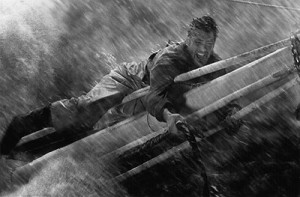 The management of The Wall Street Journal may soon have an internal uprising on its hands. Today the newspaper, along with NBC, released a new poll gauging the public’s trust in the President and the numbers are bad…real bad.

Not since George Clooney glanced at his ship’s barometer in “The Perfect Storm” have we seen anything this low. Mr. Bush’s ratings sunk even deeper than those offered two weeks ago by the SCLM CBS News, this week by The AP, yesterday’s WSJ/Harris healthcare poll, and the overall rate of decline over the last year.

So where does the revolt enter the picture? Considering that the writers and editors of the Opinion Journal are among the most stalwartly conservative and supportive of the President and his policies, I can’t imagine what’s going through their minds right now. Should they sit back and accept their employer’s branded assault on their political sensibilities? I guess their only recourse will be to re-double efforts to cast this President in a more flattering light. Good luck!