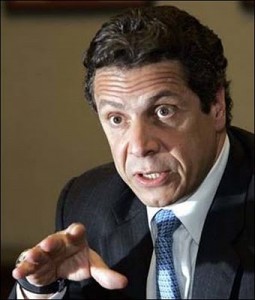 As New York’s current governor languishes in a stagnant puddle of media and public criticism, The New York Times today describes his presumed successor as “a PR machine” who “has managed to steer clear of much of what is messy about Albany…”

So what is the PR secret to NYS Attorney General Andrew Cuomo’s “61 percent” positive approval rating at a time when state officials are roundly despised by the voting public?

Could this be a social media case study in the making?

Mr. Cuomo has turned to the telephone! (Touch tone too, I bet.) Yep, he has denied all one-on-one interview requests, instead opting for group media conference calls and off-hour, off-the-record dial-ups to select reporters.

“In a way that is rare in an age of publicists, communications staff members and strategists, Mr. Cuomo is his own image shaper, relentlessly working the news media in a way that is unseen by the public and that is challenging for those trying to pin him down on any issue.”

Apparently conference calls and personal backgrounders fall short of satisfying reporters’ incessant demands for access. This is in spite of Mr. Cuomo’s personal participation therein. NY1 News is so frustrated, it created the â€œCuomo Clock,â€ which…

…details the number of days that the attorney general has ignored invitations to appear for an on-camera interview (as of Monday, it was 1,195).

The media’s frustration has a Tiger Woods kind of feel to it, though Tiger faced an issue no Governor should ever have to. Ooops. But Tiger chose to post his POV on his own web site in an effort to control the message. When he did face the media, it was a carefully orchestrated affair with no questions…and for that matter no media in attendance to ask questions.

Still we should give Mr. Cuomo some credit for availing himself to the prodding of the fourth estate, albeit faceless and surrounded by advisors armed with legal pads to ensure that all the AG’s messages are covered off. The Times even acknowledges the success of this strategy:

“Still, whatever the grumblings, Mr. Cuomoâ€™s strategy has largely worked: He has avoided taking positions on controversial issues, even as the state, facing a large budget gap, grapples with the prospects of laying off state workers, raising taxes or eliminating programs.”

Still Andrew, you might consider taking a page from the Obama-ites by getting social with the voters of New York State. We are after all in the second decade of the 21st century, right?