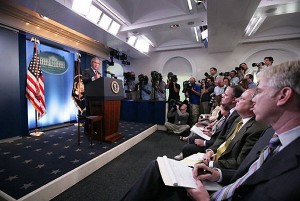 In the course of the interview, Ms. Douglass makes an observation about jumping to “the dark side”:

“The thing that really made me feel at peace with the decision is this conversation we had about telling the truth,” she says. “He wants me to tell the truth. Coming from a background in journalism as opposed to PR, that was really the thing I wanted to hear.”

I guess, Linda, you believe that PR people, as opposed to journalists, are untruthful? I’m not convinced, but then again, those that have handled these chores for the current administration didn’t do much to bolster the profession’s credibility.

Interesting thing about today’s Kurtz piece: its original title changed in the course of the morning from “As Obama Aide, Reporter Dons Flack Jacket” to “The Reporter Who Speaks for Obama.” What happened? Could this blog’s namesake rubbed some Post editor’s nose the wrong way?

Anyway, to her credit, Ms. Douglass had the good sense to consult one of the best in the biz, Mike McCurry, before taking the job. Mike had this to say:

“She wants to do it in a different way from the spinners of the past,” he says. “She wants to get away from the rat-a-tat-tat back-and-forth and keep focused on what journalists need to get the job done.”

Mike, please don’t tell me that you used the word “spinner” to describe a PR person. Oh well, I guess this is less of a pejorative in Beltway PR, as GOP strategist Dan Schnur, a spokesman for McCain’s 2000 campaign, affirms:

“The more us communication types are trained in spin, the more different we become from the reporters who are covering our candidates. “

Apart from your Bush-bred grammar, Mr. Schnur, what does “trained in spin” entail? Do those who advocate have to spin in order to prevail in the court of public opinion? Wouldn’t greater transparency, a strong grasp of the facts, and a reasonable command of the English language suffice?

“She’s very fluent in national issues,” he says. “Obviously she understands network television from the inside out.”

Hopefully her fluency with the issues and her ability to honestly connect with the media gaggle will differentiate her from her patently dishonest predecessors and current rivals, something I’m not sure that other TV journo-turned-PR guy Tony Snow truly achieved.

Maybe Ms. Douglass will even succeed in spinning the verb “spin” out of the PR vernacular? Here’s what she told TV Newser recently:

“My intention is that I won’t spin,” she says. “I absolutely vow that I will tell the truth.”

But she also laid out the challenge:

“I also understand that one has to present the campaign in a certain way at certain times. I know that will be a challenge. It’s new to me. I’ve got to learn, and on the fly.”