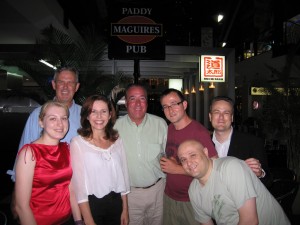 It’s been a bit slow going here in Sydney on the blogging productivity front. Access to wireless hotspots in the city has been spotty, at best. The Rocks area offers 30 minutes of free Internet access, but my son’s Macbook Pro is acting finicky (requiring WEP password, etc.)

The man who actually installed the hotspot in this section of town happened to see me struggling and offered on-the-spot tech support. He was a Windows guy, and like me, hadn’t fooled around on a Mac since his SE (and my LC II). He didn’t succeed getting me online.

Anyway, I hope to resume a full sked next week after I return. In the interim, I should tell you that I caught up with fellow PR bloggers Trevor Cook (of Jackson Wells, top left) and Steve Noble of Hill and Knowlton. (Top right). After meeting with Keith Jackson of Jackson Wells and some of Trevor’s other fine colleagues, we headed over to Darling Harbour for a local blogger meet-up last night where I also met some of the country’s pioneers in the Australian citizen journalist movement.

A young woman named Sara Goldstein (in red above) who started a fashion/shopping blog called the Bargain Queen and has gained quite (“20,000 daily visitors”). Net net (excuse the pun): the blogger enthusiasts we met estimated that Australia lags the U.S. (“by 12-18 months”) in terms of the number of bloggers. I’m not so sure, though I do know that Sydney could do better in the wireless Internet access department.