One of the bigger questions that emerged from last week’s Business Insider Ignition conference revolved around whether traditional television will endure the same pain as the newspaper industry has. 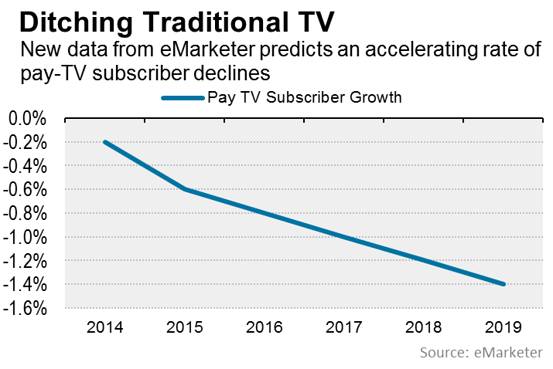 In his opening remarks, BI founder/publisher Henry Blodget audaciously stated as much:

“Traditional TV networks will go through many years of pain, like newspapers.”

I say audaciously given that the conference would soon have on stage arguably two of the TV industry’s most powerful executives: Comcast CEO Brian Roberts and CBS Inc. CEO Les Moonves.

Not unexpectedly, both TV chiefs painted a much different picture of their companies’ place and prospects in the new streaming, time-shifted, binge-watching, cable-cutting, OTT-enabled TV ecosystem.

Mr. Roberts was up first and chose to use his presentation time to showcase Comcast’s new (since November 2014) X1 Guide, “the industry’s first voice-guided TV interface:”

“We’re at 10 million boxes and deploying 40 thousand a day.”

In extolling X1’s virtues and promise, he showed the Ignition audience how users can alter movie plots for their premium VODs and audibly demand highlights of DVR’d NFL games (all from the cloud).

“Give consumers what they want, which is what X1 does.”

“We’re trying to offer new products that are not necessarily offered as a big bundle.”

On NBC and ad-blocking:

“We’re trying not to have the big bet on one thing. Diversify. Make ads more relevant.”

“You can’t run one of these companies without worrying. We take nothing for granted.”

“We’ve doubled our cash flow in less than five years”

In contrast to Philadelphian Brian Roberts’ measured manner in parsing Mr. Blodget’s pointed questions, CBS’s Les Moonves, a New Yorker, was having none of Blodget’s premise that TV was in decline.

He faced off against Brian Stelter, the host of CNN’s “Reliable Sources” and a former New York Times scribe on the TV/media beat (who’s also no softball interviewer).

One of Mr. Stelter’s first questions out of the box: “What is the biggest misconception about the TV industry?” Moonves didn’t skip a beat:

“That broadcast TV is dying. We have 20 million people watching ‘The Big Bang Theory’ every week.”

“As slowly or as quickly as it moves (eg, bundles, streaming), we’re going to be there”

Mr. Stelter then asked, “Will younger audiences turn off to TV?” to which Mr. Moonves replied:

“I can’t believe that will happen. There’s something from everyone.”

He also noted that:

“CBS Interactive works so good because they honor and respect traditional media.”

…to which his colleague Jim Langone, President of CBSi, added:

“‘The Good Wife’ has a much bigger audience online than it does on TV.”

“Putting on good content is not lucky. It’s really hard to do. There is a skill set that comes with that.”

And, on the platforms:

“Yes each platform carry deal is hard and takes a new negotiation.”

“We sell a lot of product to Hulu. We didn’t join initially. We like being on our own. Hulu’s doing great.”

“As soon as Netflix announces its ‘House of Cards’ audience, we’ll announce CBS All Access audience.”

“People will not be spending money on channels they don’t want to watch” [e.g. ESPN]. 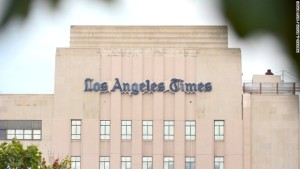 It’s clear that the newspaper industry has endured considerable, and some predict life-ending pain these last ten years. Yet, as print, broadcast and digitally native news orgs embrace a model wherein their content resides across different digital platforms, social channels and devices, and it’s monetizable, there’s growing hope for producers of quality news and information.

A recent study even showed that the newspaper industry is showing signs of life:

“[The study] finds that in November newspapers saw a 16 percent gain in ad spending over October, the biggest month-to-month gain in six months.

Moreover, it was the third time in the past five months that ad spending rose month to month, and it was driven by a 38 percent gain in retail, which up until October had been cutting back on newspaper spending.”

Tell that to the L.A. Times.