Who can keep track of the myriad year-ending media and marketing predictions posts? If you’re like me and don’t have the time to sift through everything the pundits have prognosticated, here it is in one take:

We have officially entered the age of mobility wherein smartphones and tablets have overtaken desktops and laptops for content consumption and commerce.

Plus the visual web.  Now let’s move on.

Over the past year, I’ve been keeping tabs on the “strides” PR agencies have made in social media and the analytics/measurement game. Unfortunately, the picture isn’t all it’s framed out to be. With a few exceptions, I believe that agencies are losing their birthright in the battle to lead in social media communications and measurement. Other “marketing” entities have eaten the PR industry’s lunch through their ready embrace and leverage of new digital content strategies and channels.

The big global firms certainly have invested in departments focused on brand-building and consumer engagement via the primary social channels (mostly prodded by their forward-thinking, marketing and measurement-driven clients at CPG companies).

But I’d opine that the rank and file of those toiling on the agency sie of the PR services equation, including those at the cool-sounding “digital boutiques,” continue to offer as their primary deliverable (and measure of success) earned editorial media placements.

One of the most buzzed about “downtown” PR shops even has the term “media relations” baked into its company name. Here’s a typical in-house PR job description that reveals just how mired we are as a profession in the publicity-generating paradigm:

I’m hardly one to diminish the value (or evolved art) of generating editorial coverage for a client. Just attend one of our PCNY lunches to know this.  Also, there’s no better feeling in our profession than a client hit over The AP wire or on GMA. In fact, the PR industry’s steadfast embrace of media relations is probably because many clients continue to define and pay for PR success with an appearance on NBC “Today,” a feature in the Wall Street Journal, a hit in TechCrunch, or a photo layout in People magazine.

Still, as consumers take a steady diet of news and information from an increasingly wider stream of sources, e.g., those they follow or have friended on Twitter and Facebook, the talented headline writers at news aggregators like HuffPost, Daily Beast and Buzzfeed, and the more mainstream news orgs like The New York Times, WSJ, Reuters, etc., the tried-and-true “media placement” no longer has the capacity to produce the sustaining inertia on which brands (or memes) are built.

What’s missing from most agencies is an investment in the skill sets that broaden the PR pros’ media horizons to include new earned/paid/owned hybrid schemes that blur the lines between advertising, direct marketing and PR. We now see client messaging amplified as sponsored (i.e., paid) stories not only on Facebook, but on Mashable, The Atlantic, Forbes, Gothamist and countless other “ad-driven” digital media properties.  Pay for placement has taken on a new meaning in the new media paradigm.

What’s more, PR seems to have fallen short in crunching the audience behavioral data to assess whether a marketing/sponsored/native message has produced the desired action. Again, the large “holding company” agencies, plus Edelman, have the sufficient resources to invest in the back-end big data measurement tools to demonstrate client ROI.

However, ask most agency staffers what their clients really want the answer is invariably the same: a story (ie, positive branded message) in the mainstream news media.  Few agencies are looking at measuring paid digital creative’s ability to draw eyeballs, clicks, likes and shares.

With PR people now outnumbering journalists by a ratio of four-to-one, the reliance on earned media engagement as the primary catalyst of conversations is no longer a given. Other modes for building a client’s digital footprint must be considered.  (I dare not mention the shorter fuses most reporters have for PR operatives given the daily assault on their email inboxes.)

As for the digital-only research and marketing shops, they’ve approached client brand-building from the paid end of the marketing spectrum. I wouldn’t even consider them in the public relations space, though PR agencies need to pay attention: many digital ad/marketing shops are aggressively hiring to build their earned (and thus more holistic) menu of communications offerings. 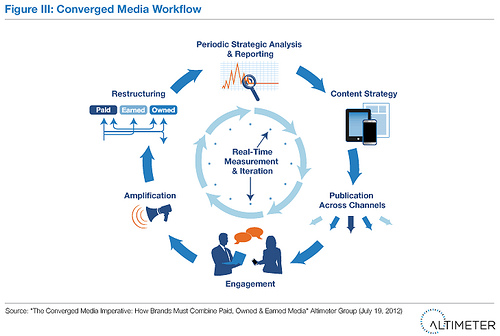 Looking head to 2013, the question will be: which flavor of communications agency will more expertly offer what Altimeter’s Jeremiah Owyang and Rebecca Lieb define as a “converged media workflow” approach to addressing the client’s communications need in our much-changed media landscape.

I’m personally rooting for my more prosaic brethren in the PR space, but based on my observations, much more work still needs to be done to inculcate rank and file staffers with the knowledge (and budgets) to lever open the other windows and doors into today’s influential digital media properties.